G K Chesterton called the cleerihew a “severe and stately form of free verse”, but then he had been a close friend from schooldays of the man who invented it, Edmund Bentley. Indeed, Chesterton illustrated the first book of whimsical verses, Biography for Beginners, which Bentley published in 1905 under the name of E. Clerihew. 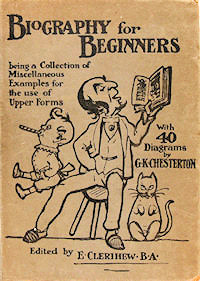 The form is slight but not slighting, conventionally consisting of a quatrain with the name of the biographee as the first line. The lines are of unequal lengths, rhymed AABB, often written in a flat-footed or mangled way more reminiscent of prose than verse. The first, which Edmund Bentley is said to have composed during a boring science class at St Paul’s School, was:

Sir Humphry Davy
Abominated gravy.
He lived in the odium
Of having discovered sodium.

Clerihew was Bentley’s middle name, which was given him (and which he in turn passed to his son Nicholas) to perpetuate his mother’s maiden name, Margaret Richardson Clerihew, Clerihew being an old Scottish surname. It was applied to the verse form by others and seems to have first surfaced in its own right as the name in 1928.

Sir Christopher Wren
Said, “I am going to dine with some men.
If anyone calls
Say I am designing St. Paul’s.”

Someone who creates clerihews is a clerihewer, an appropriate term for a person who hacks such lines out of the living language.