This contraption came to my attention, as so many things do, whilst I was looking for something else, in this case in a book with the title A History of the City of Lawrence in Massachusetts by Jonathan F C Hayes, dated 1868. This is a peculiarly formatted book, with its text only on right-hand pages, faced by adverts for everything from cough drops to cotton-cleaning machines. One promoted the clothing emporium of C B French, who announced:

The finest qualities and latest styles of silk hats manufactured to order, and fitted to the head by the French conformator. 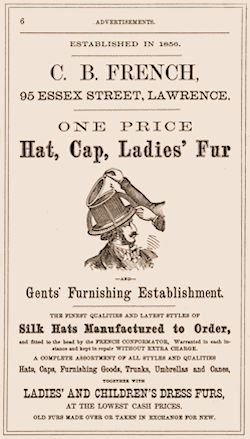 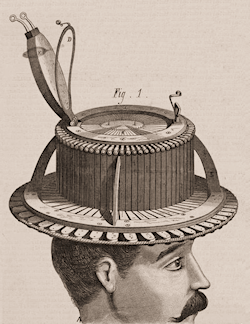 Top: the advert by Messrs C B French of Lawrence; Bottom: an illustration of it from a French patent application

An illustration showed the conformator to be a sort of circular cage that fitted over the head. Dozens of bars around the rim were pushed in by a spring to record the lumps and bumps on the head of the man or woman being measured. The machine punched a paper pattern for the hatter, who used it to set the outline of a former on which the brim of the hat was reshaped. The pattern was often kept so the customer could order new hats without having to visit the store or go through the process again.

The conformator was indeed French. The word appeared first in the French language, as conformateur, a thing made to conform to the shape of something else (devices of the same name recorded the shape of the bust in dressmaking). The invention of the conformateur for hats is variously credited to a man named Maillard in 1843, to the firm of Allié Aine the following year and then to that of Allié-Maillard in 1852, all based in Paris. Though conformators have long since ceased to be manufactured, they continue to be used by bespoke hatters such as Lock of London; the rare examples that come on the market are highly prized and expensive.

I was delighted to find more terminology in Scientific Hat Finishing and Renovating by Henry L Ermatinger of 1919. He explained that “The conformator consists of two separate parts, the conformator proper and the formillion, or shaping block.” The formillion is the former I mentioned above. He added that “The retailer, or renovator, should provide himself with a brim board and an iron foot-tolliker for smoothing the brim.” A search found that foot-tollikers, usually now just called tollikers (foot referred to the base of the hat, not that the tool was foot-operated), are hand tools to set the angle of the crown to the brim, but I can’t trace the origin of the term.