Is the image that comes to mind of a woman in a seat on a pivoted plank being ducked in the local pond? If so, you’re nearly right. Two punishment devices are known in medieval and post-medieval England with closely similar names, the one having evolved from the other. Much confusion among writers has resulted. The one that I’ve described is properly called a ducking-stool, a name that needs no explanation. 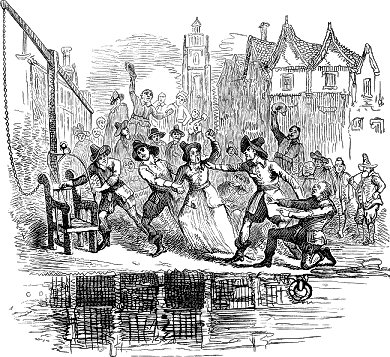 An illustration of a rather ornate ducking-stool from George Clarke’s History of Ipswich of 1830. The scold is wearing a brank or iron bridle.

The cucking-stool was rather different, as you may judge from a genteel comment by Robert Chambers in his Book of Days in 1863: “The cucking-stool was a seat of a kind which delicacy forbids us particularly to describe.” You can appreciate why he said that when you realise that cucking derives from cack, faeces, which is also to be found in cack-handed. A cucking-stool was a commode, called at the time a close-stool — a covered chamber pot in a wooden seat.

The offender was placed on the stool as a punishment designed to subject her to embarrassment and ignominy. (The device was used for women only: men had the pillory.) The stool was often fitted with wheels so that she could be paraded about the town. The stool later became a chair for ducking the offender in a pond, but the old name was sometimes preserved.

The main offence punished by both devices was of being a scold, a woman who constantly nags or grumbles. This was considered to be not just a problem for her immediate family but for the community at large and to need firm action to quieten her down. The punishment was also for brewers who sold bad ale or bakers who gave short measure, because most brewers and bakers in medieval times were women.