We are in the northern English city of Newcastle-upon-Tyne in the late 1640s, during the Cromwellian Commonwealth following the Civil War. The city fathers became unhappy, as many municipal authorities had before and many have since, with the levels of drunkenness among the local men. 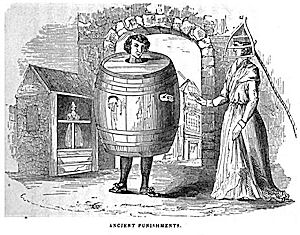 An impression of the punishment, from Glimpses of the Wonderful of 1854. The woman alongside is wearing a branks, a scold's bridle.

Their punishment for the offence was novel. If putting the offender in the pillory or stocks failed to induce sobriety, they had their law officers take a cask, remove one end, cut a hole in the other end for the head and two in the sides for the hands and force the convicted drunk to parade around town wearing this heavy garment for a set period. This was the drunkard’s cloak.

References to it appeared in many works in the nineteenth century, often as a moralistic warning of the dangers of intemperance:

We may safely affirm that it would be better for them to be put inside of barrels in that way, than to allow them to put the contents of rum and whisky barrels inside themselves, as they are too fond of doing.

The Friend, a Religious and Literary Journal, 10 June 1854. It was published in Philadelphia by the Society of Friends.

It was sometimes implied it was a common punishment in medieval times. That was debunked by William Andrews in his book of 1899, Bygone Punishments. He pointed out that it, and the term, had never been applied in any other place or at any other period. He argued that it’s uncertain if the punishment was ever even exacted in Newcastle. There’s no reference to it in the city’s records and the sole evidence for it, he said, is this:

He hath seen men drove up and down the streets, with a great tub or barrel opened in the sides, with a hole in one end to put through their heads, and so cover their shoulders and bodies, down to the small of their legs, and then close the same, called the new-fashioned cloak, and so make them march to the view of all beholders; and this is their punishment for drunkards and the like.

England’s Grievance Discovered in Relation to the Coal Trade, by Ralph Gardner, 1666.

However, there are a number of references, including one by Samuel Pepys in his diary in 1660, to its having been a punishment used in continental Europe for various offences.

Much the same image turns up in cartoons of people who have lost everything, even their clothes, though usually the barrel is worn off the shoulder on straps. I suspect this may be an independent invention and not a reference to this rather rare punishment, as a shift in sense from drunkenness to bankruptcy, while not utterly impossible, would be a stretch.