The shape of this item of exercise equipment is so familiar that it has become a figurative term for anything of similar form. But it looks nothing like a bell. And why is it dumb?

Early references hint at a much more substantial device:

I exercise myself an Hour every Morning upon a dumb Bell, that is placed in a corner of my room, and pleases me the more because it does everything I require of it in the most profound Silence. My Landlady and her daughters are so well acquainted with my hours of exercise that they never come into my room to disturb me while I am ringing.

Joseph Addison, writing in The Spectator, 1711. 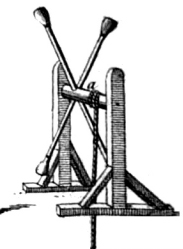 A play of 1727 likened a man to one who “pulls upon the string of a dumb Bell”, a sermon dated 1749 claimed that “a dumb Believer is like a dumb Bell, all Lumber and no Melody”. We must conclude that the device was a substantial construction on which an exerciser could imitate the action of a bell-ringer in a church belfry, but lacking a bell, so that it was mercifully silent, or dumb.

This is confirmed by an illustration of a type of dumb bell in the Gentleman’s Magazine for September 1746 (right), which shows a system of weights in place of the bell. A note accompanying it says:

This contrivance, being framed together, and placed in a garret, or upper room, affords the exercise called RINGING, by means of a rope, which comes thro’ the floor or floors down to a study or chamber, and was practised by an eminent physician who was very fat.

At some point, the name of this immobile device was transferred to the device we have today, one that Joseph Addison also knew and described in the same article in The Spectator; he gave it no name, though he called the exercise he did with it by the classical Greek term skiamachia, shadow fighting or fighting with oneself.