A bore is a type of tidal wave, a single wave that flows up a river estuary as a result of an especially high tide. It’s an example of what scientists call a soliton, a solitary wave that travels with little loss of energy, retaining its shape and speed but increasing in height as the river narrows and shallows. Among the most famous bores is that on the River Severn, a few miles from me.

Eagre is an older dialect name for the phenomenon on the rivers Ouse and Trent as well as the Severn. It’s been written in many ways, among them hygre, higre, agar and aigre. These are now rarely seen, but the spelling aegir is still in use for the similar bore on the River Trent. 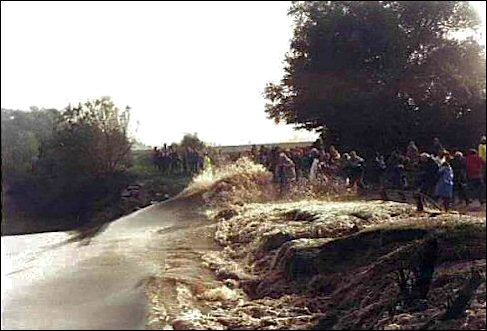 Don’t be too eager to view the eagre! (Photo: Mike Matthews)

Though we understand how eagres happen, we’re no nearer discovering the origin of that name. One theory was described by Eliza Chase in her novel Acadia of 1884: “In some northern countries the Bore is called the Eagre. Octavia says this must be because it screws its way so eagerly into the land, but is immediately suppressed, and informed that the name is a corruption of Oegir, the Scandinavian god of the sea.” Dictionary makers are now sure that’s incorrect, but they have nothing to put in its place.

It features in George Eliot’s The Mill on the Floss (1860): “Above all, the great Floss, along which they wandered with a sense of travel, to see the rushing spring-tide, the awful Eagre, come up like a hungry monster”, and in A Protégée of Jack Hamlin’s by Bret Harte (1894): “The steamer Silveropolis was sharply and steadily cleaving the broad, placid shallows of the Sacramento River. A large wave like an eagre, diverging from its bow, was extending to either bank, swamping the tules and threatening to submerge the lower levees.” [The tule — pronounced tuley — is a type of rush common in California.]