The word commemorates The Great Masticator, a title that these days might lead to juvenile hearers getting the giggles. He was Horace Fletcher, a food faddist of the end of the nineteenth century and the early twentieth. He advised people to chew each bite of their food 32 times, to eat small amounts, and only to eat when hungry and free from stress or anxiety. Hence the verb’s meaning, to chew thoroughly, and this rhyme of the time: 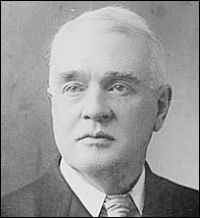 Eat somewhat less but eat it more
Would you be hearty beyond fourscore.
Eat not at all in worried mood
Or suffer harm from best of food.
Don’t gobble your food but “Fletcherize”
Each morsel you eat, if you’d be wise.
Don’t cause your blood pressure e’er to rise
By prizing your menu by its size.

The heyday of Fletcherism was the early 1900s. Time Magazine wrote a retrospective on the craze in 1928, “For a time wealthy mothers counted their children’s jaw beats at the table while ragged micks in the streets threatened to ‘Fletcherize’ their little enemies.” A good example appeared in 1908 in Food Remedies by Florence Daniel: “But whatever is taken must be ‘Fletcherised,’ that is, chewed and chewed and chewed until it is all reduced to liquid.” The word for a while became frequent in writings of all sorts. P G Wodehouse used the term in The Adventures of Sally in 1922 to illustrate the serious nature of a dog fight: “The raffish mongrel was apparently endeavouring to fletcherize a complete stranger of the Sealyham family.”

Fletcherism was taken seriously by many people and had some distinguished adherents; it lasted until the 1930s. Unfortunately, eating meals took much longer than usual and there were complaints that it severely restricted the conversation at dinner parties.