This Latin word is from flor–, a flower, and legere, to gather or collect. In that language it didn’t refer literally to flowers, but to little flowers of composition, choice poems or epigrams by various authors (it’s the exact Latin equivalent of the Greek anthology, which derives from anthos, a flower, and –logia, a collection). 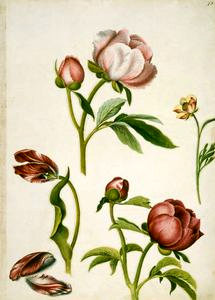 An illustration from Marshal's Florilegium

However, florilegium first appeared in the English language in 1711 in a sense nearer the literal one: describing a collection of flower illustrations. This continued a usage that had begun a century earlier in the Latin titles of books by European illustrators like Emanuel Sweert and Jean Theodore de Bry. Though the word was soon after taken back by scholars to refer to collections of writings, this sense may still sometimes be found, for example in the title of a 1996 book A Hawaiian Florilegium, subtitled “Botanical Portraits from Paradise”.

Now another early collection, created by the seventeenth-century gentleman gardener Alexander Marshal, has been published after being hidden away for years in the Royal Collection at Windsor Castle, after being presented to George IV in thee 1820s. This book, too, has florilegium in its title and brought the term a wider audience.