Few words could be rarer than this exotic creation by a master of neologisms, the physician and author Sir Thomas Browne, who is at number 69 in the list of most quoted authors in the Oxford English Dictionary. Browne — whom the English writer Philip Howard recently described as “a polysyllabic old quack” — invented it in his vast encyclopaedic work of 1646, Pseudodoxia Epidemica. This attempted to refute many of the errors and superstitions of his age, but has been ridiculed since for its own frequent errors. 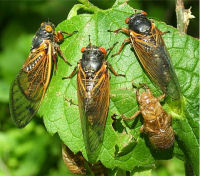 Browne spelled his creation fritiniancy and used it for the sounds of insects (“The note or fritiniancy [of the Cicada] is far more shrill then that of the Locust”). He took it from the Latin fritinnīre, to twitter or chirp. The Oxford English Dictionary, in an entry dated 1898, prefers fritiniency, but notes that “modern dictionaries” prefer fritinancy. Today’s modern dictionaries don’t include it but the very few authors who have borrowed it have indeed mostly used that spelling. This is a rare sighting:

“The native thought of mankind is gratitude. The most significant noise of earth is the singing of birds,” said the professor with determination. “Fritinancy,” declared the young man beside the fire. “What’s that?” said the professor. “I said fritinancy, which is the whimper of gnats and the buzzing of flies.” “You’re talking nonsense.”