This is a splendid term for a collector or lover of snowdrops:

But if you run up against a committed galanthophile, expect to become embroiled in their obsessive mania. Suggest that snowdrops are all a bit similar and the galanthophile will sit you down and take you through the minute differences. 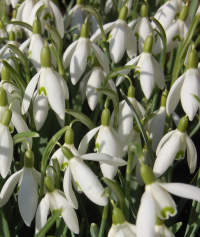 It comes from the formal botanical name for the genus, Galanthus, which derives from Greek gala, milk, and anthos, flower. (Words from gala include galactose, milk sugar, and galaxy, originally meaning the Milky Way.)

It’s possible to trace galanthophile to the late nineteenth century. It appears, as galanthophil, in an issue of The Garden in 1892 in reference to the Somerset gardener James Allen, a pioneer in hybridising snowdrops. Elsewhere, credit is given to the garden writer and plantsman E A Bowles; he is said to have created it in a letter, whose date isn’t given, but is almost certainly after 1892. The earliest example of the modern form that I’ve so far been able to trace is in the Royal Horticultural Society’s Daffodil and Tulip Year Book for 1971.

In recent years the term has become moderately common among garden writers in the UK as study and collection of snowdrop varieties has become much more widespread, even fashionable.