It’s a fine example of a rhyming doublet. It started life in the seventeenth century as a way to describe reckless or careless persons, often young men.

These days it’s much more often applied to unruly football games (“There was a harum-scarum finish to what had looked like a harum-scarum game”), reckless undertakings (“Every few years they come up with some harum-scarum scheme to get around our Constitution or do away with it”), unrestrained performances (“Staccato raw guitar harum-scarum stuff about a deluded bloke whose girlfriend left him”), and disorganised offices (“Day-to-day operations remain harum-scarum in the department”). It’s becoming less common to find an example that’s directly attached to a person:

What you can expect is a braggadocio celebration of the vices attributed to harum-scarum artists throughout time. 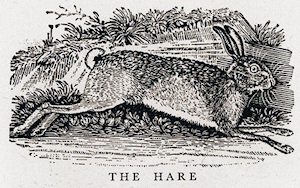 The word is usually said to be a combination of two verbs, hare and scare. The latter is obvious enough. The former may have reminded its coiners of the zigzag track a hare takes when it’s being chased, often doubling back to deceive its pursuers, or it may perhaps just be a reference to the speed with which it can move — literally haring along. Dictionary makers think this because early examples are written hare’um scare’um (“hare them and scare them”).

Curiously, however, the very earliest form is harum starum, which might have come from a rather different idea. This stayed around for a while and was used as part of a famous character reference during the American Revolution:

He is Clever, and if any thing too modest. He seems discreet and Virtuous, no harum Starum ranting Swearing fellow but Sober, steady, and Calm.

A letter by Eliphalet Dyer to Joseph Trumbull, dated 17 Jun. 1775. The man concerned is George Washington.