Reader Bill Woodruff serendipitously encountered this curious word. A dictionary of a century ago defined it like this:

hippodrome, To conduct races, equestrian, pedestrian, or aquatic, or other contests, in which the result is prearranged by collusion between the managers and the contestants, in order to make gain through betting.

To confirm the validity of the dictionary’s definition, I offer this newspaper report in evidence:

Much interest was manifested in the races on Saturday, as it was expected that they would be real genuine contests of speed, instead of what they proved, some very poor hippodroming. ... The fraud was so palpable and barefaced that the only wonder was that the judges didn’t send them all to the stable, declare the pools off, and teach these fellows a lesson that would last them for some time.

The original hippodromes were chariot-racing circuits of classical Greece (the term is from hippos, horse, plus dromos, a race or course). The term was imported from France to Britain in the early nineteenth century for a related spectacle and was later applied in Britain to a theatre that offered a varied bill. Hippodromes, these days conventional theatres, survive in some British cities, notably London, Bristol and Birmingham. 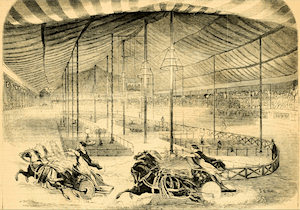 Franconi’s Hippodrome. It was built of wood and brick with a canvas roof, seating 4000 patrons, and was modelled on the Hippodrome de l’Etoile in Paris. This picture, of the opening night, was published in the New York Illustrated News on 14 May 1853.

In America travelling entertainments from the middle of the century often advertised themselves grandly as hippodromes after the French model. An early example was Franconi’s Hippodrome, which ran in New York for two seasons in 1853 and 1854. Contemporary illustrations show that this featured indoor chariot races in a circuit similar to those of ancient Greece. The idea was taken up by travelling shows, which often advertised themselves as both circuses and hippodromes. Since the original circus was the Roman equivalent of the hippodrome, that sounds like an etymological tautology, but they were different entertainments. The circus rings featured the familiar animal acts, clowns and acrobats and were surrounded by a hippodrome track.

Since the races on these hippodromes were designed as entertainments rather than serious sporting contests, we may guess that who won and lost was supervised by the management to maximise the audience’s pleasure. When serious contests were fixed, it wasn’t a huge jump for people to call the practice hippodroming.

The first examples date from the 1860s. A direct link with horses was quickly lost, since even early examples refer to boxing, athletics and other sports. In the twentieth century, car and aeroplane racing were added. The term was still occasionally to be found as late as the 1970s.