A hodening was a mumming or masquerade on Christmas Eve in Kent. This ancient custom died out around 1910 but has been revived, with several groups performing in East Kent towns. Originally, the hodening or hoodening was performed by agricultural workers, who went from house to house to beg money. These days, groups tour pubs and parties, performing a short play and collecting for charity. 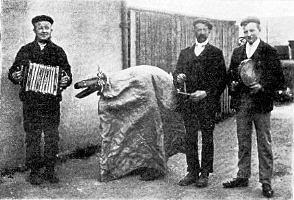 A hodening group, from The Hooden Horse of East Kent by Percy Maylam, 1909

Central to the performance is a wooden horse’s head — the Hoden or Hooden Horse — with moveable jaws that are fitted with hobnails for teeth. This description of it appeared in The Mirror of Literature, Amusement, and Instruction on 22 December 1832:

A string is attached to the lower jaw, a horse-cloth is tied round the extreme part of the head, beneath which one of the party is concealed, who, by repeated pulling and loosening the string, causes the jaw to rise and fall, and thus produces, by bringing the teeth in contact, a snapping noise, as he moves along; the rest of the party following in procession, grotesquely habited, and ringing hand-bells! In this order they proceed from house to house, singing carols and ringing their bells, and are generally remunerated for the amusement they occasion by a largess of money, or beer and cake.

However, an article in the Church Times in January 1891 suggests that the tradition was by then in terminal decline:

Nothing was done or sung by the small crowd around; and the clapping caused by the opening and shutting of the mouth continued, till the creature having been satisfied with money was driven away.

Nobody knows for certain where hodening comes from, although it’s known in print from the beginning of the nineteenth century. The Oxford English Dictionary speculates with others that it might be from a dialect confusion with wooden, referring to the head. It is also guessed that it might have come about because the horse forms a hood over the operator or because of some fanciful association with Robin Hood. Because a horse sacrifice was said at one time to take place at the winter solstice among peoples of Scandinavian origin, it has also been suggested that the word is a corruption of the name of the Norse god Odin (or Woden or Wotan).