I was leafing, if that’s the right word, through a digital copy of an issue of the Strand Magazine, most famous as the publisher of Arthur Conan Doyle’s stories about Sherlock Holmes, when this word almost jumped off the page. It was in a story about a child pickpocket who might have come from the pages of Oliver Twist:

He felt himself much drawn toward a man in an “immensikoff”—a fur-lined overcoat —which was quite the most magnificent garment in the crowd. The large side-pocket of the “immensikoff” gaped invitingly, and, though outside overcoat-pockets were barren vessels as a rule, this was so very easy that nothing could be lost by trial.

A Lucifo Match, by Arthur Morrison; Strand Magazine, 6 Jan. 1909. The title is a play on lucifer, a common term for a match; Lucifo was actually a Spanish conjuror, who was wearing the overcoat. He got the better of the pickpocket (match in the title is in the contest sense).

This grandiloquent word for a rather fine garment was the accidental invention of one of the most famous music-hall artists of Victorian times, Arthur Lloyd, a Scottish-born comedian and singer who made his name in London with a vast output of self-penned musical numbers. This is the first reference to the song that I know about, in an article about the Winchester Music Hall in London:

Mr. Arthur Lloyd appeared in appropriate costumes, and sang and discoursed in his easy, telling manner as “The Pedagogue,” and “Immenseikoff, or the Shoreditch Toff.”

When singing Immenseikoff, Mr Lloyd portrayed himself as a “swell” (slang of the time for a fashionable or stylish person of wealth or high social position). His song had this chorus:

Immenseikoff, or the Shoreditch Toff, a polka with words and music by Arthur Lloyd.

Toff is a slang term for a rich or upper-class person. The joke lay in the incongruity of a man from Shoreditch being able to emulate the style and clothing of a well-off person, as Shoreditch was one of the poorest parts of the East End of London. Immenseikoff was presumably a play on the language of immigrant Russian Jews who were beginning to settle in the area. We may guess that it was fake Yiddish meaning “big head” (kopf being German for head) with a nod to Russian names ending in -kov. 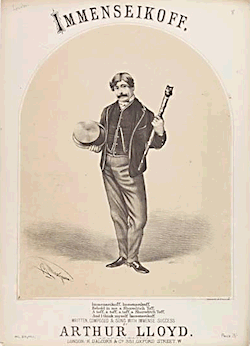 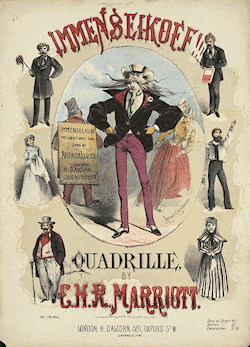 Left: The cover of the sheet music of Arthur Lloyd's song, showing Lloyd in the typical “flash” clothing of the swell of the period. Right: The cover of Charles Marriott's quadrille version. No overcoat anywhere.

His song became hugely popular (an American visiting London in 1870 remarked that everyone was humming it). His word likewise became well known. In 1869 it appeared in a story in an American newspaper as the name of a Russian giantess in a circus. The same year Charles Marriott, a popular light-music composer of the period, turned Lloyd’s song into a quadrille with the same title.

Several readers recalled a music-hall favourite of the 1880s, words by Will Herbert and music by Bessie Belwood (real name Kathleen Mahoney), with the title What Cheer ’Ria, in which Ria (short for Maria) splashes out a whole shilling to sit in the stalls, only to have all her pals in the gallery mock her, “Oh ’Ria she’s a toff and she looks immensikoff”. The word clearly had an enduring legacy in its original sense of somebody inappropriately trying to rise above their station in life.

At some point the word came to mean an overcoat. Several decades later it was claimed that this came about because Lloyd wore one when performing the song. However, no contemporary reference exists that I can find and his song doesn’t mention an overcoat. On the cover of the sheet music he’s wearing the “flash” fashion of the time. As the covers of his other songs show him in the costumes he wore to perform them, I suspect that he never wore an overcoat while singing Immenseikoff and that the supposed connection was invented much later in a misguided effort to explain its meaning.

The reason for its adopting this meaning isn’t recorded, but Hilary Powers wrote to tell me after this piece appeared in the newsletter that it would have been an appropriate name for the garment described in Arthur Morrison’s story. “The greatcoat in question was clearly a shuba, a fur-lined overcoat designed for the Russian winter.” We may imagine immigrant Russian Jews wearing their shubas and having Londoners apply immensikoff to them.

Immensikoff survived for several decades. Arthur Morrison’s use in 1909 was almost its swansong, though Arnold Bennett employed it in his novel Hilda Lessways two years later.