A person or object that is Janus-faced has two contrasting aspects. In particular a person may be deceitful, figuratively two-faced. Israel Zangwill wrote a century ago that “Life is Janus-faced, and the humorist invests his characters with a double mask; they stand for comedy as well as for tragedy.”

This is a more recent example:

Like most South African towns, Graaff Reinet is Janus-faced: a largely white suburb on the one hand and a black township on the other, shaped by the contrasting contours of South African history. 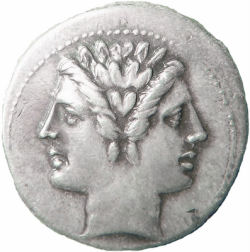 The term includes the name of the Roman god Janus, which comes from Latin ianua, an entrance gate. He was the god of doorways and gateways; as doors can be passed in either direction, he came to represent both the past and the future. His image was of a man with two faces, looking forwards and backwards (as on the coin, left). The Romans always put Janus first in prayers, because he symbolised beginnings. But he could also represent success or failure, especially in war.

He was the god of January, whose name comes from him — in Latin Januarius (mensis) — the month of Janus), which had become the first month of the Roman calendar probably some time in the second century BCE.

A Janus-faced word is a contronym, a word like cleave that has two opposing meanings. In two other, much rarer terms, something that’s Janiform or Janian literally has two faces or aspects.