Larrikin is a quintessentially Australian term. It appeared in the 1860s for a street rowdy or urban tough. The writer Archibald Forbes described the larrikin as “a cross between the Street Arab and the Hoodlum, with a dash of the Rough thrown in to improve the mixture.” Vicious fights between larrikin gangs were common. In the late nineteenth century some gangs formed a subculture with a dress style that included broad-brimmed hats, gaudy waistcoats, strapped moleskin trousers and high-heeled boots. 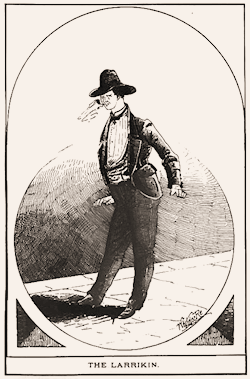 A larrikin, from Nelson Whitelocke’s A Walk in Sydney Streets, 1885.

Early suggestions of its origins were fanciful. The obituary in the Melbourne Argus in 1888 of a police officer named James Dalton said that he had accidentally invented it in a court hearing through a mishearing of his saying larking in his broad Irish accent. This was countered by a letter in a later edition, which argued that it was instead from leery; the writer said it had became a catchword of Melbourne youths in the 1860s from its appearance in a popular London song, The Leery Cove. Locals started to call the boys leery kids, which was transmuted over time into larrikin. A related story of the same period was that criminals in local jails described themselves as leery kin, which was similarly amended through the Irish brogue of their jailers. Kin was also invoked in Larry’s kin, the supposed relatives of some unknown Australian. This has been linked to another Australianism, happy as Larry, recorded first around the same time as larrikin. The supposed connection with Irishmen in two of the tales has led to some writers on language declaring larrikin to be an Irish word.

We can dispose of all of these stories at a stroke by looking across the Tasman Sea. Larrikin is recorded in New Zealand in 1866, two years before Australia. There can be little doubt that the word had a common origin in the old country. The English Dialect Dictionary has larrikin as a dialect term of Warwickshire and Worcestershire for a mischievous or frolicsome youth. It would seem to have become significantly modified in sense during its journey to the Antipodes.

In modern Australian English, larrikin has been inverted into a term almost of respect. The old sense of a tearaway or hooligan has been replaced by that of a non-conformist and irreverent person with a careless disregard for social or political conventions, someone who may be thought truly Australian.