A newspaper report in July 2015 about the reopening of long abandoned and forgotten Second World War tunnels in the white cliffs of Dover mentioned the latrinalia that had been found there.

We may correctly surmise that the word is linked to latrine. The -alia suffix indicates a collection, often implying triviality — a good example is marginalia and latrinalia was presumably created by analogy with it. Latrinalia is graffiti on lavatory walls.

Latrine is from Latin. The Romans have bequeathed us much scatological or bawdy text on lavatory or brothel walls. Many have been recorded in Pompeii and Herculaneum, preserved by the eruption of Vesuvius in AD79 that buried the towns in ash. Most are too rude for this column but this one is in the Casa della Gemma (the House of the Gem) in Herculaneum: “Apollinaris, medicus Titi Imperatoris hic cacavit bene.” (“Apollinaris, doctor to the emperor Titus, had a good crap here.”) 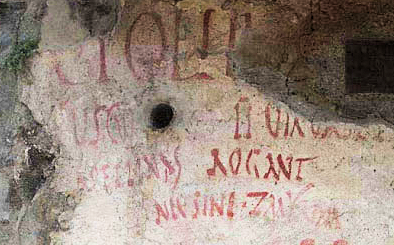 But the word latrinalia is modern. It was coined by the late Alan Dundes, a pioneering academic folklorist at the University of California, Berkeley. He wrote — among much else — about the homosexual symbolism of American football, the Bible as folklore and the social significance of jokes. He showed that folklore isn’t found only in ancient ritual, fables and superstitions but in contemporary cartoons, poems and lore such as urban legends.

Dundes coined latrinalia in his 1966 paper Here I Sit — A Study of American Latrinalia. Archaeologists and folklorists use it for this subset of graffiti, though the general public hardly knows it.