This word appeared in the caption to a photo I saw recently in a whaling museum in the Azores. (I spare no effort to bring you interesting words.)

The caption mentioned the groove that had been worn by ropes in the loggerhead on a whaling boat. A loggerhead, I learned, was a round timber block set upright in the stern of the boat. Once a harpooner had struck the whale, he passed the rope attached to the harpoon round the loggerhead a couple of times to hold it fast.

The loggerhead in the photo had been carefully fashioned, so there was nothing log-like about it other than it having been made of timber; however, you might fancifully say that it looked like a wooden head. So it wasn’t an altogether unlikely name for the contrivance. But when I came to look into the history of the word it turns out that the whaling sense was a latecomer. 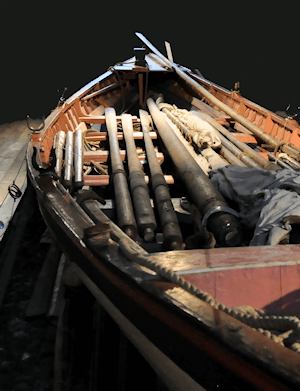 An Azorian whaling boat, with its loggerhead at the stern.

Loggerhead starts to appear in the historical record near the end of the sixteenth century. An early example:

Ah you whoreson loggerhead! You were born to do me shame.

At that time it meant a stupid person, the closely similar blockhead suggesting the idea behind it. Though presumably derived from log, what a logger was at the time is unclear, because it doesn’t appear in print until much later. The usual view among dictionary makers is that it was a heavy block of wood fastened to the leg of a horse to hobble it, to prevent it straying, an assertion that dates back no further than a dialect dictionary of 1777.

What went through the minds of whalers who applied it to the useful device on their boats is impossible to discover but we might guess that it was similarly considered to be a dumb block of wood for restraining an animal, although a whale rather than a horse.

We know loggerhead these days most commonly in the idiom to be at loggerheads, meaning to be in stubborn or irresolvable disagreement or dispute over some issue:

The school security guards are now at loggerheads with the city’s police department, who they accuse of attempting to hide the true scale of the problem, to improve their crime statistics.

As loggerhead has no clear meaning in English (its whaling sense being a long obsolete term of art in a specialised and localised activity) the idiom is meaningless in itself, but its form is expressive and it has lasted surprisingly well in the language. It can be traced to 1671 in the related go to loggerheads, to start a fight, though its modern form came into being in the early nineteenth century.

How loggerhead began to be used for a fight is similarly lost to history. One image it calls up is of two thick-headed idiots face-to-face in an argument that is likely to end in fisticuffs. That may be enough to explain the origin. However, some writers point to various implements with bulbous ends, of which one was used on board ship:

They had been sparring, in a spirit of fun, with loggerheads, those massy iron balls with long handles to be carried red-hot from the fire and plunged into buckets of tar or pitch so that the substance might be melted with no risk of flame.

There are records of the devices being used as weapons during close engagements of ships, perhaps contributing to the genesis of the expression.

Another maritime association is with the loggerhead turtle; in this case the idea is that of an animal with a big, heavy head. A couple of birds, a Falkland Islands duck and several fish have also had the word applied to them at various times for related reasons. In English dialects a large moth, tadpoles and a species of knapweed have also been called loggerheads.

There are three small places in England and Wales with the name. The one in Staffordshire is said to take its name from the local pub, The Three Loggerheads. This almost certainly derives from an old visual joke — the inn sign would have pictured only two stupid men, the third being taken to be the onlooker.