You can’t easily misunderstand the meaning of this American word, since it’s so obviously contains within its sounds the idea of something excellent or highly desirable, just right as the name for the annual US Lollapalooza pop festival, these days held in Chicago.

It has been spelled just about every possible way down the years (the Oxford English Dictionary has it under lallapaloosa). Its extravagant enthusiasm may be judged from an early appearance, in Miss Minerva and William Green Hill by Frances Boyd Calhoun, dated 1909:

Another early example is in a baseball game report in the Fort Wayne Sentinel of May 1903, one we may be glad to have missed (the reporter said disgustedly that one pitcher was all too accurate, since he hit the bat almost every time):

There wasn’t enough ginger in the players nor audience, either, to keep a colicky baby awake, the only excitement being furnished by a loquacious individual in the grand stand who was rooting for Evansville, and he rooted right, too. He proclaimed himself the High-past-potent-grand-mufti-lallapaloosa of the Amalgamated Knockers’ Brotherhood and had a bigger assortment of mallets on hand than a croquet factory. 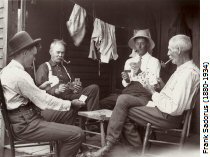 Any hope of a lollapaloosa? (A photo
taken about 1908-09; the photographer, Frank Sadorus, is second from left.
Image courtesy of the Illinois
State Museum.)

That was one of its earliest appearances in print, since it seems to have been around in the language for only a few years by then. Other early usages suggest an origin among card players, such as in an 1899 report in the Daily Herald of Delphos, Ohio, about card sharps fleecing a hick: “Another got a lallapaloosa, consisting of three clubs and a pair of spades, and took $85 of the farmer’s money.” In 1897 the Idaho Daily Statesman had another: “‘A lalla-pa-loosa,’ answered big John, and threw his hand to Scovel. There was a jack of hearts and a deuce, tray, four and five of diamonds.”

Where it comes from is uncertain. Lulu and lolla, both also meaning something good, are recorded earlier, and lollapaloosa may be an extravagant outgrowth of the latter. Suggestions that it may derive from appaloosa, the name of the famous breed of Native American horse, are ruled out on grounds of date.