This mythical beast is a favourite villain in fantasy stories and games, so much so that it is surely more widely known today than it has ever been. As one example, Harry Potter fans will know that Hagrid bred those nasty blast-ended skrewts from manticores. 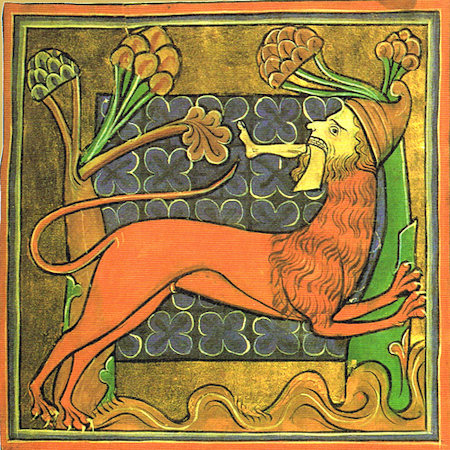 From the mid-13th century bestiary, A Book of Beasts (MS Bodley 764), which is contemporary with the description by Bartholomaeus Anglicus. It depicts the beast's man-eating reputation through a human leg held in its jaws

The manticore was first mentioned in classical Greek writings 2,500 years ago, which reported rumours from the east. This is the way it was described in a famous medieval work by an English writer, which he based on Greek sources:

It is said, that in India is a beast wonderly shapen, and is like to the bear in body and in hair, and to a man in face. And hath a right red head, and a full great mouth, and an horrible, and in either jaw three rows of teeth distinguished atween. The outer limbs thereof be as it were the outer limbs of a lion, and his tail is like to a wild scorpion, with a sting, and smiteth with hard bristle pricks as a wild swine, and hath an horrible voice, as the voice of a trumpet, and he runneth full swiftly, and eateth men.

De Proprietatibus Rerum (On the Order of Things), by Bartholomaeus Anglicus, written about 1240. It was an encyclopaedia of science and theology compiled for Franciscan student friars in Magdeburg. The first English translation of the Latin original, from which this extract comes, was made by John Trevisa in 1398.

Despite this detailed and authoritative-sounding description, other writers and illustrators say the manticore had wings, or that his body was that of a tiger (which led to his name occasionally being rendered through folk etymology as mantiger); he has been said to come from Africa as well as India. In heraldry, he has been drawn as a beast of prey, sometimes with spiral or curved horns or the feet of a dragon.

But everyone agreed the beast ate people, ate them up so thoroughly in fact that nothing was left behind. If a person vanished from a village without a trace, it was assumed that a manticore was to blame (a splendid cover for murderous villainy, you may think). The name can be traced back to an Old Persian word meaning a man-eater, and first appeared in English in John Trevisa’s text.