Down the years, numerous readers have asked me for a word that was the female equivalent to avuncular, characteristic or typical of an uncle. At the time, I had to reply that I knew of no equivalent term meaning aunt-like. I am now better informed.

Materteral is first recorded in the Oxford English Dictionary from a journal of 1823. The OED’s citation is so brief it doesn’t give much of a flavour of the original but you can see why the editors truncated it:

A venerable matron and her virgin sister, who had passed the grand climacteric, happening to cast their eyes over the plates of these volumes as they were lying on our table, and seeing the Herculean attitudes of some wrestling, others balancing, some climbing the column of pegs, the rope or the mast, others taking the long leap with the pole, and vaulting over the bar, exclaimed with maternal and materteral anxiety, that the legislature ought to prohibit such dangerous sports; since the unavoidable accidents, to which human life and limb are exposed, are quite sufficient without increasing the number of them by wantonness and temerity.

The Monthly Review, Dec. 1823. A review by W Taylor of two books on teaching gymnastic exercises. 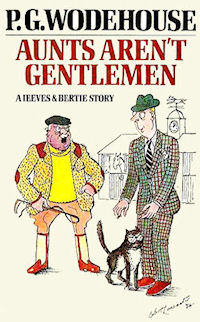 They don’t write stuff like that any more, thank heavens. It was in a spirit of pedantic humour that materteral was conceived (if I may be permitted to use that word in the company of ladies who have “passed the grand climacteric”) and it continued in that vein in a book of 1867, Spindrift, in Munsey’s Magazine in 1901 and in The Aunt’s Cook Book of 1922. A couple of modern works have used it seriously but it is otherwise unknown.

The late William Safire, who wrote the On Language column in the New York Times, didn’t know materteral either. He was struck by the lack of a potentially useful adjective for matters auntish and asked his readers for suggestions to correct the omission. Replies included auntique, tantular and tantative. One reader noted that Latin amita, one’s father’s sister, wasn’t the root of any English word and so Safire settled on amital, though he noted “it sounds to me like a barbiturate”. It has been used, though almost as rarely as materteral.

There’s an argument for having both. Scholars know that the Latin root of avuncular refers specifically to one’s mother’s brother and materteral to one’s mother’s sister. So we could use amital for the paternal aunt and create patruitic (from the Latin patruus, father’s brother) to fill the final niche. If they catch on, do remember you read it here first.