It is not good to be called a myrmidon. It is not a term of respect. Officious and aggressive police officers sometimes have it thrown at them by more literate commentators, as do holders of public office who are carrying out unpopular policies:

Their concern is that an unprecedented spending spree by our 535 noble members of Congress, supported by the myrmidons at the Fed, will force interest rates higher and bond values to fall. 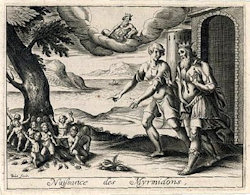 One version of the legend: after Aegina is depopulated by a plague, king Aescus asks Zeus to turn the ants into people

It is less effective than it might be as a term of abuse because it requires the addressee to have at least a smattering of classical knowledge. According to the Greek storyteller Homer in the Iliad, the Myrmidons were a warlike people of Thessaly; they were renowned for their mindless loyalty to Achilles, their king, who led them in the Trojan War. Greek legends about where they came from played on a fanciful link of their name with Greek myrmēkes, ants. One suggested that Zeus created them from a nest of ants.

The word has existed in English since medieval times but over time has become progressively less reputable. For Shakespeare, myrmidons were faithful followers, the members of a bodyguard or retinue. A century later they had become hired ruffians or mercenaries. By the nineteenth century they had sunk somewhat lower to be opportunistic supporters of some person or organisation. Today a myrmidon is often an unscrupulous subordinate:

But not even the police will forever be able to ignore the question of whether or not Rupert Murdoch, always a keen reader of his own newspapers, knew from the first day they did it that his myrmidons were lifting illicit stuff for their piddling stories.