We’ve all come across a pride of lions, a flock of sheep, a swarm of bees, and a gaggle of geese. Such collectives are part of our common language.

Other fairly well-known cases are a parliament of rooks, a murmuration of starlings, and an exaltation of larks. There are so many, and so popular a subject, that they’ve generated a sub-genre of humour — a catalogue of librarians, an enumeration of accountants, a descent of relatives, even a wunch of bankers, as well as that hoary old joke about the essay of Trollopes/jam of tarts/anthology of pros. 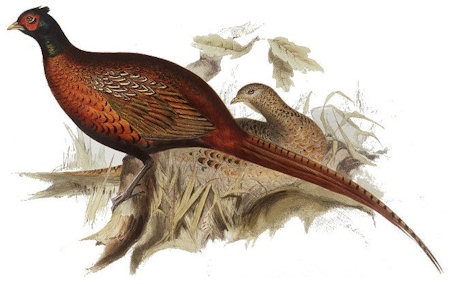 One pair doesn't make a nye. The common pheasant, drawn and engraved by Edward Lear

Nye is a rarer example. It’s usually said to be any collection or group of pheasants, though older lexicographical authorities insist that it really means a brood of the birds. That’s because the word derives from Anglo-Norman ny, from Latin nidus, a nest. But as fowlers were using the group sense as long ago as 1701, it’s hard to insist on etymological exactitude.

This is a rare example of the word appearing outside a list:

Hark ye! only last week that jack-fool, the young Lord of Brocas, was here talking of having seen a covey of pheasants in the wood. One such speech would have been the ruin of a young Squire at the court. How would you have said it, Nigel?” “Surely, fair sir, it should be a nye of pheasants.”

Sir Nigel, by Sir Arthur Conan Doyle, 1901. A covey, as any countryman of the time would have known, is a group term for partridge, ultimately from Latin cubare, to lie down.

Another term from the same source for a brood or nest of pheasants is nide. This, too, has long since become a general collective:

The farmer informed us that the game was very plentiful; and when we entered the first stubble field, we saw a nide of fourteen pheasants run into the hedge row.