It’s thankfully been a while since I’ve seen an examination paper; do they still sternly instruct you to “write on one side of the paper only”? Or as Sellar and Yeatman parodied it in 1066 And All That, “do not on any account attempt to write on both sides of the paper at once.” 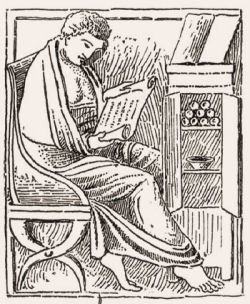 I’ll bet he’s not perusing an opisthograph
(the cupboard for storing the scrolls, by the
way, is a scrinium)

We’re used to bound books, in which a blank page is unusual enough that the reader may on occasion encounter the reassuring — albeit paradoxical — legend, “this page intentionally left blank”. It was very different when texts were hand-written scrolls on papyrus or parchment. To write on both sides would result in handling rapidly wearing away the writing on the outer side. It was also awkward to read the reverse side and it was difficult to unroll a scroll and roll it up the other way, because, once rolled, they took on a permanent bend.

As a result, scrolls written on both sides are rare enough that a special term has been created to describe them: opisthograph. It comes via French and Latin from Greek opistho, behind, plus graphos, written. Rather rarely, the word also refers to a memorial slab that has been reversed so that a new inscription can be made on the blank side.

Bound books (the technical term for one is codex, to distinguish it from the scrolled sort) are for the most part opisthographic, a useful property that was a key reason why they superseded scrolls. But hand-written documents are still commonly anopisthographic, written on one side only.