Though oryzivorous appears in a scientific glossary in 1857, no example of it appears in print before modern times and even then — with just one exception that I know of — only in works that specialise in strange and exotic words. This suggested that finding out why anyone bothered to invent it might be worth enquiring into.

The root is classical Latin oryza, rice. Add the ending -vorous, devouring or eating, and you get an adjective meaning “rice-eating”. This is common enough, both among people and animals, but nobody seems to have felt the need for a pompous Latinate formulation to describe it. 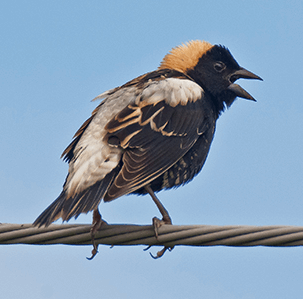 When I searched for it, I kept turning up the supposed scientific name for a small bird, Dolichonyx oryzivorous, which I learned was a migratory blackbird which may be seen in North America in the spring and summer. This is commonly called the bobolink, an odd name that’s said to be from Bob o’ Lincoln, the way that English-speaking American colonists in the eighteenth century rendered the bird’s call. It does indeed eat rice, voraciously when it can get it, though it’s happy to eat seeds of many other kinds.

This happy encounter with a species I’d never heard of turned out to be the result of a frequently repeated error, because its correct formal name is Dolichonyx oryzivorus, without the final o. The famous Swedish naturalist Karl Linnaeus first gave the bird a scientific name in 1766, though he called it Emberiza oryzivorus, putting it in the same genus as 40 or so species of buntings. However, it was soon realised the bobolink wasn’t really a bunting and since 1827 it has been the lonely sole member of the genus Dolichonyx, a word that the naturalist W J Swainson derived from Greek dolichos, long, and onyx, nail or claw. You can see why from the photograph.

We may guess that oryzivorous, with that extra o, came into being in that glossary solely because Linnaeus had created the closely similar oryzivorus.