Easter is the time for many traditional and modern activities in England, such as the nutters’ dance in Bacup, cheese-rolling in Stilton, the World Coal Carrying Championships in Gawthorpe, bottle kicking in Hallaton, and pace egg plays in various northern towns. 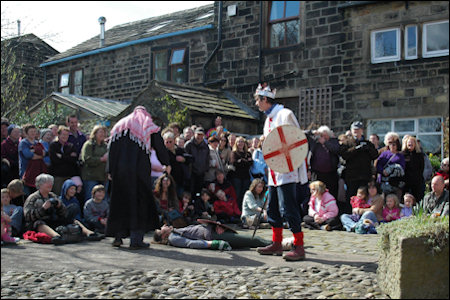 The last of these is an Easter mummers entertainment or folk play, related to the tale of St George and the Dragon. It was at one time common in northern England, particularly in Cumbria, Yorkshire and Lancashire. It was preserved in these areas, while in other parts of the country it moved to Christmas time.

Lots of local variations are known, but in the Heptonstall version in Calderdale it depicts the battle between St George and the Bold Slasher, the Saracen knight. St George is at first killed, but is then brought back to life by a mysterious character, the Doctor, and defeats his enemy. Other characters include the King of Egypt and the comic Tosspot. In related versions, Tosspot is replaced by the Fool; extra characters such as Lord Nelson, Beelzebub the devil and Dobbin the horse also appear. Traditionally, the mummers were working men (very rarely women), for whom it was a way to earn money from audience contributions.

The etymological connection of pace egg play with Easter is that the first word is a variation on the ancient Pasch, or Paschal, both of which are from Pesach, the Hebrew word for Passover. Pasch egg, pace egg and paste egg were all names given at various times to Easter eggs, usually specially decorated. An etymological curiosity is that pace egg play is a relatively recent term, presumably created by folklorists, not recorded before it appeared here:

In connection with Pace-egging there is the Pace-egg or Easter play, which resembles in its main features the Christmas mumming play.

Pace-egging was another form of mumming in which performers, pace-eggers, paraded singing through the streets to collect funds. Before then, the play seems not to have been separately named, but was subsumed within other pace-egging activities. A century ago the play was still very popular in some towns:

There are no signs of the decline of pace egging as a seasonal custom. On the contrary this Easter there have been more bands of actors than for years past. The play is rather a mystery to many people, who can hardly credit that in essentials it goes back to pagan times in England.

It died out in the following decades, largely as a result of social changes provoked by the First World War. Today’s enactments, for example in Calderdale and Cumbria, are reintroductions of the past half century.