A BBC television programme, Victorian Farm, recently featured a panking pole, something I remember well from my time running the Cider Museum in Hereford. It’s a long pole with a hook on the end used to shake apples and pears from high branches during harvesting.

And while they scrabble around for windfalls, the lord of the manor shoves an evil-looking stick with a hook (his “panking pole”, he calls it, but I’m wondering if he’s left an “s” off) up into the tree, hooks a branch and begins to shake, as he has done every autumn, for ever. It’s beautiful to see: the aristocratic old man, with his claw, shaking away, and then the apples raining down from the heavens on the proles below.

From a review of Victorian Farm in the Guardian, 9 January 2009.

The word is now rare, and requires a person with long memories to bring the details to mind:

Still running the 50-acre orchard at Breinton planted by her father, Miss Bulmer’s lifetime experience of growing and harvesting the apples for the cider mills comes alive in this well-illustrated account. She recalls “gangs” of women in the 40s picking up apples off the ground for a shilling (5p) a sack, or £1 a ton, after the fruit had been shaken off the trees with a “panking pole”.

Gillian Bulmer, granddaughter of one of the founders of the cidermakers H P Bulmer and Co of Hereford, remembers her cider history in the Hereford Times, 8 October 2008. 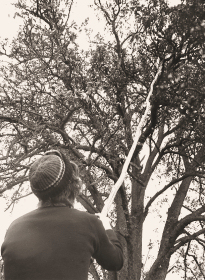 A panking pole being used to dislodge perry pears from a tall tree at Westons Cider, Much Marcle, Herefordshire, in November 1981.

The origin of the word is obscure. The Oxford English Dictionary suggests that the southern English dialect verb pank meant only to pant or breathe hard, though the sense better fits the definition given in the English Dialect Dictionary a century ago, which says it meant to beat. There may be a link between hard breathing and beating via the OED’s comment that pank could also refer to a pounding heart. Barney Deibert has pointed me towards the Dictionary of American Regional English. This has an entry for pank in the rather different sense “to pack or tamp down; to crush”, which it suggests might be a blend of pack and spank but which also notes the Norwegian or Danish banke and the Swedish banka, to knock, tap, or beat, as possible origins. In 1887, Francis Tebbs Havergal recorded in his Herefordshire Words and Phrases that the verb could be spelled polt instead and that it had the specific sense “to knock apples off trees”. George Cornewall Lewis also notes the equivalence of polt and pank in his Glossary of Provincial Words Used in Herefordshire and Some of the Adjoining Counties of 1839 and comments further that pank may actually be a dialect form of bang. Equally, polt might be a mere variation on pole.

With such differing views, allied to such limited evidence, your guess is as good as anybody else’s.

[Michael Quinion’s little book Cidermaking, published by Shire Albums in 1982, has recently been updated and republished.]