It’s a very rare word in English: the OED has just the one citation for it, from Richard Tomlinson’s 1657 translation of a Latin medical work by Jean de Renou, who is better known by the Latin version of his name, Renodaeus. I tried to find an example of pastinaceous using Google Books and the only one that appeared was from one of my own works. How more self-referential can research get? 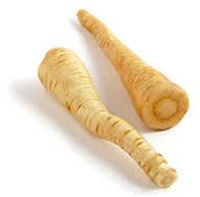 The word derives from the Latin pastinaca, which could be the parsnip but often also referred to the carrot. Related words in that language are pastinare, to dig, pastinator, someone who prepares the ground for planting, and pastinum, a two-pronged digging fork or dibble, which probably lent its name to the vegetables because they so often formed forked roots in the ground (it would appear that difficulty in growing well-shaped parsnips is not solely a modern problem).

The Latin survives in the systematic name for the genus of the parsnip, Pastinaca, and in the archaic English pastinate, to dig or cultivate land. Parsnip itself came to us through French and at first was spelt passenep, as though it were a kind of nep, Middle English for the turnip.