Predict, prophesy or foretell are more pithy and serviceable choices in these plainer-speaking days when long words have rather fallen out of fashion. On the infrequent occasions that journalists today select it as the right word in the right place, they often imply by it pretentiousness or gentle humour:

As British financial commentators assume expressions of pious concern to prognosticate on the euro crisis, wickedly self-serving thoughts run through their minds. 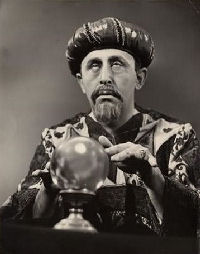 It derives from medieval Latin prognosticare, to make a prediction and can be traced back to the classical Greek gnosis, knowledge, plus the prefix pro-, earlier in time. The related medical term prognosis existed in classic Greek and survived passage via Latin to reach English unchanged.

To prognosticate in classical times was to predict the future from signs or portents, to augur. This was the first meaning in English. Later, it shifted slightly to refer to a person who predicts on the basis of such signs:

As whiteness of flesh is considered a great advantage in veal, butchers, in the selection of their calves, are in the habit of examining the inside of its mouth, and noting the colour of the calf’s eyes; alleging that, from the signs they there see, they can prognosticate whether the veal will be white or florid.

The Book of Household Management, by Mrs Isabella Beeton, 1861.

As prediction is so difficult (as the wag said, especially about the future), some writers have mordantly suggested prognosticate really means “guess”.