Defining this word as meaning “beautiful” hardly begins to explain it. These days it is applied mainly to women, especially to film stars and models whose curvaceous comeliness is a cynosure for all observers. To be so called, a woman has to be more than just a pretty face. But it has become a tongue-in-cheek word difficult to use in a straightforward way and which too often appears as an alliterative element in overwrought prose, as in a newspaper article that described Eartha Kitt as a septuagenarian sex kitten and pulchritudinous purrer (hang your head in shame, Minneapolis Star Tribune).

The noun, pulchritude, has been in the language since the early fifteenth century. It derives from the Latin word pulchritudo that comes from pulcher, beautiful. 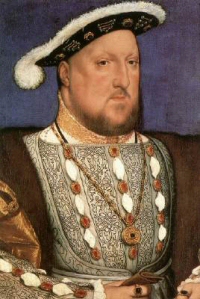 The epitome of pulchritude? (The Holbein portrait of King Henry VIII)

In its first few centuries, it could be applied equally to both sexes. In 1522, Cardinal Wolsey came to the royal court with a papal legation and made a speech to Henry VIII in which he described the king as “Your noble persone, so formed and figured in shape and stature with force and pulchritude.” (Henry was then 31. Don’t be confused by portraits of the obese middle-aged man: Henry was handsome and athletic in his youth.)

In 1919, an author named Inez Haynes Irwin wrote about Californian men in The Native Son: “That agglomeration of the Anglo-Saxon, the Celt and the Latin, has endowed the Native Son with the pulchritude of all three races.”

Though unusual now, it’s still possible to use it for males, as a (female) writer did in the Boston Herald in April 1998: “And then there’s Kevin Costner and Paul Newman, who, of course, fall under the category of Super Hunks. So you can imagine our excitement when we learned that, come spring, the pulchritudinous pair could be coming to Massachusetts!”

One oddity about pulchritude is that it almost entirely vanished from British English after the seventeenth century, but survived in American English. Another is that pulchritudinous was created in the US surprisingly recently: the first example I can find is from 1875, in an Iowa paper, the Burlington Weekly Hawk Eye: “If we were Mrs. Livermore, we should object to being called ‘an amiable and pulchritudinous lady.’ It is the reckless use of syllables like these which does more to encourage extravagance and debauch society than all the fashion magazines.”