Imagine opening a bottle with great ceremony by striking off its neck with one sweep of a blade. That’s sabrage. Traditionally the bottle contains champagne and the implement is a sabre. 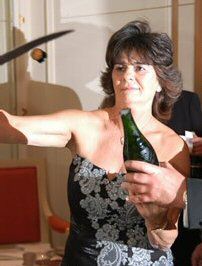 You might think the result will be lots of broken glass and mess, but the skill of sabrage lies in hitting the bottle hard just at the bottom edge of the annulus, the glass ring at the top of the neck. The blow breaks the neck off cleanly, complete with cork. Experts advise you chill the bottle very well and avoid shaking it, remove the foil and wire cage, hold it away from you at an angle of about 40 degrees and strike with the bottle seam uppermost. Do not try this at home, kiddies. In truth, a sabre is optional: almost any hard object with an edge will do it.

At least one organisation, the Confrérie du Sabre d’Or, maintains this tradition at its champagne parties. But otherwise, both it and the term are rarely encountered. Stories hold that it dates from Napoleonic times and was invented by cavalry who found it difficult to open champagne bottles while on horseback, but did have usefully heavy sabres handy. You may celebrate the ingenuity of this story with a small glass of something bubbly if you wish.

Its language origin is definitely the French sabrer, to hit with a sabre. It’s a close relative of sabreur, one who fights with a sabre, best known in beau sabreur, a fine soldier or dashing adventurer.