A British reader encountering this word would be likely to think of the county of Shropshire, whose name is thus historically abbreviated. Somebody who lives there is a Salopian. It might not look it but Salop and Salopian are indeed connected to Shropshire. It’s in part the result of a split a thousand years ago between the Old English and Norman-French names for the county town of Shrewsbury.

My recent reading of John Warren’s The Nature of Crops has thrown up a quite different sense of salopian, one which the Oxford English Dictionary notes only as a one-off invented word dated 1822. The link is with a foodstuff that has been spelled salup, saloop and salep as well as salop.

The main ingredient was the powdered root of orchids, boiled in water to make a thick starchy drink. In Britain the usual source was the early purple orchid, at the time so common in meadows and pastures that it was harvested in bulk. The first use of the roots was medicinal, to correct various internal problems. It was also thought to increase fertility in men and act as an aphrodisiac, because its twin tubers resembled testicles. 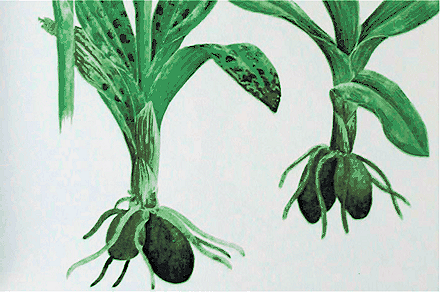 The orchid was once known as dogstones or dog’s cods for this reason. Salop comes from the same idea: it has been traced via Portuguese and Turkish to the Arabic khasyu ‘th-tha‘lab for an orchid, literally fox’s testicles.

Salop became fashionable in the later seventeenth and eighteenth centuries as a restorative drink, which at a shilling an ounce was much cheaper than the imported coffee, tea and chocolate drunk by more prosperous classes. A recipe:

The Compleat Housewife: Or, Accomplish’d Gentlewoman’s Companion, by Eliza Smith, 1728. Why the author thought it necessary to boil the water for so long before adding the powdered salop is unclear, unless he was extraordinarily concerned about the bug-ridden state of English water. 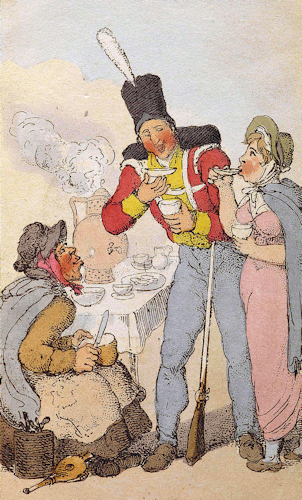 Saloop drinkers, from Thomas Rowlandson’s Sketches of the Lower Orders of 1820. Note the two are drinking from the saucer, common at the time but considered a mark of poor manners.

The concoction (usually under the name saloop) was sold by street vendors in most English cities and also in specialist shops; it was usually flavoured with sugar and milk rather than wine and lemon. Charles Lamb wrote grandly in 1841, “Palates otherwise not uninstructed in dietetical elegancies sup it up with avidity”.

It became so popular as an early-morning pick-me-up by workmen before beginning their labours that English orchids couldn’t meet demand and supplies, thought in any case to be of superior quality, were imported from Turkey and India (countries where salop continues to be consumed under related names). Later, salop was applied to a similar drink, made from sassafras bark imported from North America:

Passing on, in our way towards the Foundling Hospital, we perceived a groupe of wretches, male and female, round a kind of cauldron filled with an infusion of sassafras, well known by the name of saloop, which they seemed to drink with the greatest avidity.

A modern Sabbath, or, a Sunday ramble, and Sabbath-day journey, circuitous and descriptive, in and about the cities of London and Westminster, and borough of Southwark, by Anon, 1794.

Salop stayed popular until the early nineteenth century. It is sometimes said that it fell out of favour through a growing belief that it was a cure for sexual diseases and that as a result nobody wanted to be seen drinking it. In truth, it was superseded in fashion by coffee. It was drunk in its final years only by the poorest of the working classes. Among its most dogged consumers were the boys employed by sweeps to climb chimneys, who found that the hot drink helped soften the mouth cancers from which they frequently suffered.