Whether Sirocco or Santa Ana or Brickfielder, winds with names are rarely good news. The williwaw, surely the strangest named of them all, is no exception.

This odd word first appears in early nineteenth-century accounts of voyages through mountainous seas and evil winds to round Cape Horn. One was by Robert FitzRoy, captain of the Beagle during his first voyage in 1829, which preceded the famous one with Charles Darwin: “The williwaws (I know no better name for the sudden gusts that come off the high land) gave us some trouble, occasionally laying us almost on our beam ends.”

At the end of the century another intrepid sailor traversed the same region:

Here I had my first experience with the terrific squalls, called williwaws, which extended from this point on through the strait to the Pacific. They were compressed gales of wind that Boreas handed down over the hills in chunks. A full-blown williwaw will throw a ship, even without sail on, over on her beam ends; but, like other gales, they cease now and then, if only for a short time.

Sailing Alone Around The World, by Joshua Slocum, 1900. 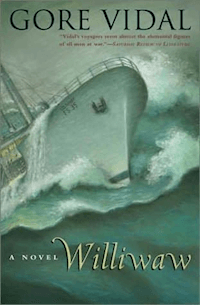 The name has since been applied to a similar phenomenon in other places, in particular the Aleutian Islands (Gore Vidal, who died in August 2012, wrote his first novel, Williwaw, after serving there as master of an Army F-S boat during the Second World War). It’s now understood that williwaws come about when air that has been cooled and made more dense on the upper reaches of a mountain roars down steep slopes to the sea. In meteorological terminology, such winds are katabatic (Greek katabatikos, from katabainein, to go down).

Williwaw is said to have been named by sealers and whalers in the area of the Straits of Magellan around 1800. Nobody seems to have the slightest idea where the word came from. The only hint I can uncover is from a writer in the Gardener’s Magazine in December 1839, who commented that williwaw was the usual Patagonian term for it. Presumably it was borrowed from a native language no longer known to us.