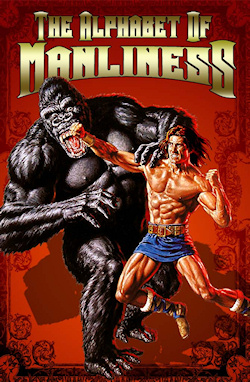 American newspapers, quick to spot a trendette, have pounced on a series of recent US television advertisements that pander to one’s inner caveman, and on books like The Alphabet of Manliness by George Ouzounian (alias Maddox), I Hope They Serve Beer In Hell by Tucker Max, and Real Men Don’t Apologize by Jim Belushi. In various ways, all preach a return to an old-style masculinity.

Another term for the unreconstructed (or reconstituted) male that pops up in some articles is retrosexual. The literary genre in which the lifestyle is celebrated has been dubbed fratire.

Some commentators deride the whole issue. Mark Simpson’s view, in the Guardian in October 2006, was blunt: “Truth be told, this is a phoney war. The ‘menaissance’ is mendacious. This isn’t retrosexual at all, but hummersexual — a noisy, overblown, studied and frankly rather camp form of fake masculinity that likes to draw attention to itself and its allegedly old-fashioned ‘manliness’, but tends — like driving an outsized military vehicle in the suburbs — to be a tad counterproductive.”

But others point to the male sex’s struggle to adjust to a world of sexual equality as the main driver for the backlash. Professor Harvey Mansfield’s recent book Manliness, for example, argues men need to recapture some conventional male virtues — such as decisiveness and assertiveness — and not be afraid to display them.

Of course, advocates of the Menaissance may argue that we shouldn’t be too concerned about what kind of a man women want these days. Isn’t that, they would say, the way we arrived at simpering metrosexuals desperate to please their other halves?

A woman friend tells me there’s a desperate need for a “menaissance.” Many women are weary of sensitive emo-boys and metrosexuals.